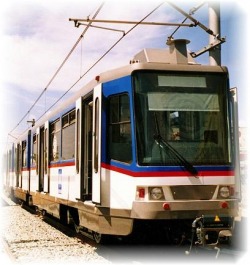 For years now, rapid growth of commuters and vehicles population have plagued Metro Manila, the center of Philippine socio-economic and political activity. Heavy traffic, pollution and all the attendant undesired results are problems that Metro Manila have to contend with daily.

Considered one of the world's highest volume thoroughfares, EDSA is a semi-circular ring road link with several radial roads leading to the metropolis' social, economical and political centers.

The avenue cuts across the cities of Caloocan, Quezon, Mandaluyong, Makati, and Pasay and bounds Pasig City and the town of San Juan.

EDSA's importance to the lives of more than eight million people - or 12 percent of the country's 68 million citizens who live in Metro Manila cannot be underestimated.

Added to the metropolis' growing population are the transients and migrants who come to live in Metro Manila in search of opportunities. Every birth, transient or migrant, is a potential commuter who will likely join more than the 2.8 million people already using EDSA.

At the same time, every birth, and transient or migrant, is also a potential car owner likely to occupy 4.6 meters by 2.7 meters, the average car area of street space.

The fast pedestrian and vehicle population growth has become a major headache for metropolitan planners who concede that Metro Manila's road, which comprise less than 10 percent of the country's network, cannot adequately accommodate pedestrian and vehicular traffic. Streets in the metropolis expand by less than two percent annually.

Statistics add that traffic has caused the loss of over P15 billion yearly due to lost man-hours, repairs and maintenance and lost fuel. Added to  these are unquantifiable discomforts to commuters and vehicle owners undergo when they travel through major streets.

At worse, heavy traffic is taking its toll on the nation's social and economic build-up. Traffic in Metro Manila is expected to nearly resemble nerve-wracking conditions in Bangkok, Thailand and in other parts of the world.

Experts agree that a long term solution, beyond just keeping vehicles off the streets, is imperative. One of the solutions that the government sponsored was the establishment of the EDSA MRT3 System. 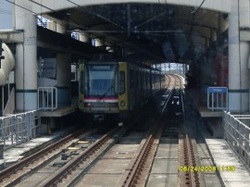 The Metro Rail Transit 3 (MRT-3) is the cornerstone of the Department of Transportation & Communication's integrated strategy to alleviate the chronic traffic congestion experience along the EDSA corridor. The Metro Rail system is designed to carry in excess of 23,000 passengers per hour per direction, initially, and is expandable to accommodate 48,000 passengers per hour, per direction.

The DOTC awarded a contract  to Metro Rail Transit  Corporation (MRTC) to build, lease and transfer the Metro Rail Transit System, under the BOT laws of the Republic of the Philippines. The scheme required the DOTC to hold the franchise and run the system particularly the operation and the collectiom of fares. The MRTC built the system, maintain the same as to guarantee the availability of the trains at specified headway at specified hours, as well as to procure the required spare parts, the DOTC pays MRTC monthly fees for a certain number of years.

MRTC obtained financial closing, with the help of international financial consultant JP Morgan, for loans worth US$ 465 million P 12.32 billion) from the Bank of Tokyo-Mitsubishi, and Japan Export-Import Bank (JEXIM); the Postal Bank of the Czech Republic and Czech Export Credit Agency; and a group of  local banks on October 17, 1997.

The loans are backed by the government through a sovereign undertaking, as agreed with the Department of Finance, to cushion risks to investors and creditors. 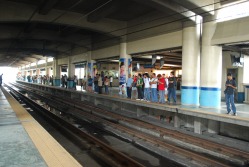 MRTC was responsible for the design, construction of the EDSA rail transit system. This included the supply of the light rail vehicles, track, signaling, communications, power distribution, and the furnishing of other necessary equipment, facilities, and spare parts. MRTC was also responsible for constructing the necessary civil works for the system including fixed guide-ways, passengers stations, power substations, LRV storage depot and maintenance facilities, and other facilities required to make the light rail transit system operational.

During the construction phase, DOTC exercised the technical supervision of the project activities covered by the contract between DOTC and MRTC, and inspected and checked whether the project was constructed in accordance with the approved plans, specifications, standards and costs.

The Department employed the services  of SYSTRA, a French consultancy firm, with technical competence, experience and track record in the construction and operation of railway systems.

To enumerate, the following are SYSTRA's role during the EDSA MRT3 Project Implementation;